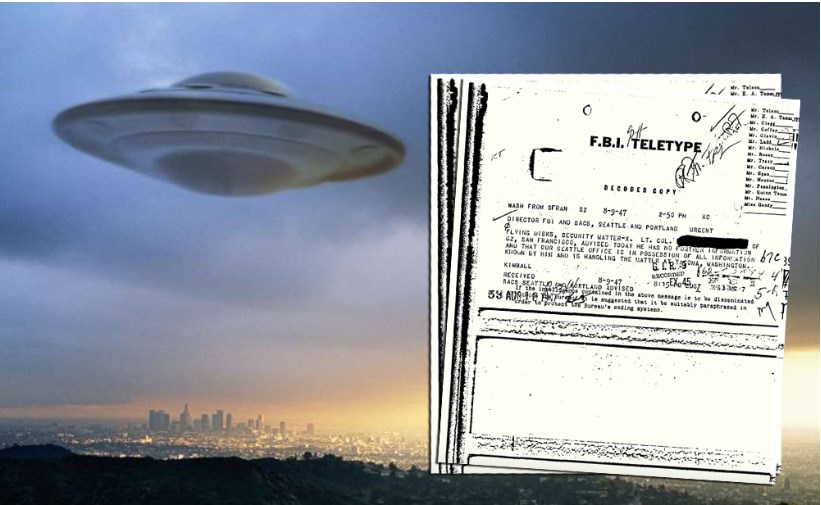 Global governments and intelligence agencies around the world have released hundreds of thousands of pages of documents pertaining to the UFO phenomenon over the past few years. These files indicate that objects are commonly tracked on radar and pursued by our own military craft, which are then sent out to take a closer look. The files also reveal there have been sightings of strange objects travelling at tremendous speeds and performing maneuvers that no known aircraft is capable of performing.

These types of UFOs might now be officially verified within the mainstream, but they’ve been seen, photographed, and recorded by credible witnesses for decades. For example, here’s a document (straight from the CIA’s FOIA Electronic Reading Room) pertaining to “a group of red, green, and yellow flying saucers” that were seen “hovering” over multiple military bases in Antarctica.

These objects are thought to be extraterrestrial in origin, not only because of their technological superiority, but also because many high-ranking political and military insiders, along with prestigious academics, have shared information they’ve been privy to regarding actual intelligent extraterrestrial beings visiting our planet. There could be several different groups doing so at the present moment. It may sound far-fetched, but as we move through 2017 and beyond, bits of truth will continue to leak out, and the “official campaign of secrecy and ridicule” that Roscoe Hillenkoetter described to the New York Times in 1960 may come to an end.

That being said, once this box is opened, everything will change. It will have tremendous implications for humanity — philosophically, scientifically, and technologically. Our world would change forever.

It shouldn’t really come as a surprise that the CIA  and other U.S. intelligence agencies were keeping tabs on other countries. We know spying happens all the time, and other governments probably did the same to North American governments as well.

The UFO issue has obviously been of extreme interest to these agencies, given the scale of resources put toward investigating it. One document within the CIA archives also shows that they were interested in reports of actual extraterrestrial bodies.

For example, here is one that was addressed to “certain scientists of distinction,” to “aeronautical and military authorities,” and to “a number of public officials.” The document, stored in the FBI database, shows interest in a letter written by someone with “several university degrees”  and a former “university department head.” It provides information, about extraterrestrial beings, their craft, how they operate, and where they come from.

Again, the question to ask here is, why were intelligence agencies so interested in this? They continue to investigate any reports of extraterrestrial bodies, and I have to wonder if it’s because they’ve had secrets of their own. Is it because, as Apollo 14 astronaut Dr. Edgar Mitchell once put it so bluntly, “there have been crashed craft, and bodies recovered”?

When you study ufology, you come across all sorts of stories, and one interesting thing these stories seem to share is that “they” (whoever is operating these crafts) are not interested in confrontation.

For example, in a (well-known) document released via the Freedom of Information Act (FOIA), Four-Star General Nathan Twinning wrote that the “phenomenon reported is something real and not visionary or fictitious” and that “the reported operating characteristics such as extreme rates of climb, maneuverability (particularly in roll), and action which must be considered evasive when sighted or contacted by friendly air-craft and radar, lend belief to the possibility that some of the objects are controlled either manually, automatically or remotely.”

Previous Post: The US Government Just Admitted To Recovering Materials From UFOs – Here Are The Latest Updates

Next Post: UNDERWATER UFO BASE DISCOVERY PROVES SOMETHING ELSE IS LIVING IN OUR OCEANS!