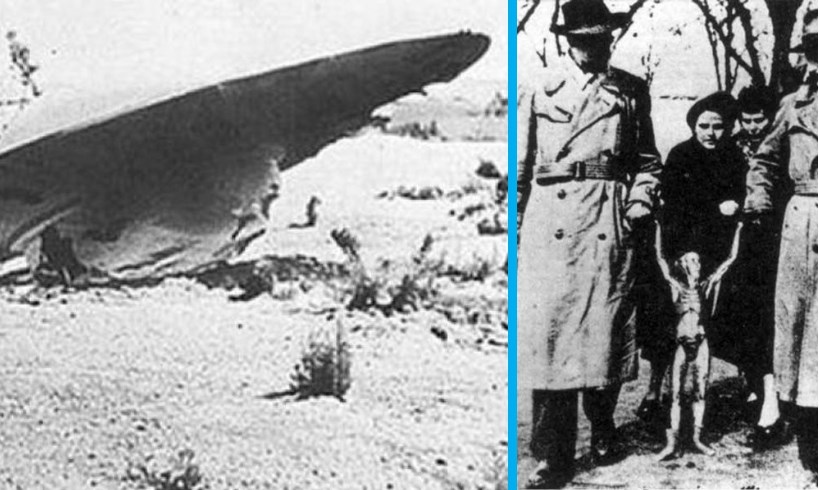 Roswell New Mexico is known for the famous alleged ‘crash’ that happened there in 1947. But if you’re not a UFO researcher, you probably wouldn’t know that alleged crashes of unidentified objects with alien bodies found inside of them have occurred dozens of times, not just at Roswell. Why Roswell became the focus of attention for this type of phenomenon, who knows, but perhaps it was the big media hype surrounding the crashed craft at that site with bodies recovered.

The idea that alien bodies were recovered as well as a crashed craft not only came from media outlets at that time, but from what are considered to be very credible sources within the military like Colonel Philip Corso, author of the book The Day After Roswell, and Dr. Edgar Mitchell, the sixth man to walk on the moon during Apollo 14.

Not only do we have credible witness testimonies for this type of thing, but we have an abundance of declassified documentation and current modern day mainstream disclosure of ‘UFO technology’ as well. For example, Steve Justice, the recently retired Director of Advanced Systems at Lockheed Skunkworks, who signed on board with the modern day mainstream UFO disclosure initiative To The Stars Academy,  has stated publicly that it would be an understatement to call the technologies he’s been around, worked with, and seen, “revolutionary.” It states that right on their website.

He also stated, while discussing the concept for the craft that To The Stars plans to build, the following:

“This is a concept for an international point-to-point transportation craft that will erase the current travel limits of distance and time. It mimics the capabilities observed in unidentified aerial phenomenon by employing a driver system that alters space-time metric. We have glimpses of how the physics of this works, but we need to harvest technologies from the Science Division to ‘realize’ the capability.”

What he is saying here is that we have these technologies, the quote “harvest them from the Science Division” gives that away.

This gives credibility to the statements made by one of his predecessors, Ben Rich, who was the second director of Lockheed Skunkwork’s from 1975-1991. He’s been called the Father of Stealth, having overseen the development of the stealth fighter, the F-117A Nighthawk. With regards to UFO technology, he stated:

“We already have the means to travel among the stars, but these technologies are locked up in black projects, and it would take an act of God to ever get them out to benefit humanity. Anything you can imagine, we already know how to do it.”

As far as documentation, the amount of electrooptical data and files indicating various military encounters with UFOs is outstanding.  We also have evidence that governments are and were desperate to reverse engineer this technology, and given the above statements, they already have.

Dr. David Clarke is an investigative journalist, reader and lecturer at Sheffield Hallam University in England. He was also the curator for The National Archives UFO project from 2008-2013, and regularly comments in national and international media on UFOs. He uncovered documents showing how the Royal Air Force expressed great interest in finding UFOs to help come up with new and innovative ways to overcome their enemies during the Cold War . You can read more about that here.

Even though they have been partly censored they can’t conceal the fact the UK military were interested in capturing UFO technology or what they coyly refer to as ‘novel weapon technology’… And the files reveal they were desperate to capture this technology – wherever it came from – before the Russians or the Chinese got hold of it first… Although this was 1997, Russia was still regarded as an undefeated enemy with a weapons programme regarded as a threat to the West.

This type of lore dates back to the 1950’s. Here’s an interesting piece found within the CIA’s electronic reading room:

“A German newspaper recently published an interview with George Klein, famous German engineer and aircraft expert, describing the experimental construction of ‘flying saucers’ carried out by him from 1941 to 1945.”

Previous Post: Two ‘Alien’ Beings Can Be Seen Inside A UFO – From Footage Verified By The Turkish Government

Next Post: Authentic UFO Footage Caught On Camera By A University Professor & His Research Students